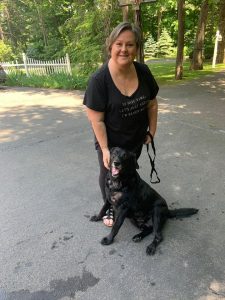 In the dog rescue world, sometimes a dog comes into our lives and it takes a village to help them on their journey to their happy ever after. Recently, Dog Star Rescue’s village of amazing volunteers, along with his eventual adopter, each played a special role in giving McClain the life he deserves.

When McClain, a beautiful black lab mix, came to Dog Star Rescue from a southern shelter, we took him in knowing his history and what it would take to find him the perfect home. As a 8 year old dog with a significant health history, we knew it would be a tall order to find his forever family, but true to our mission, we knew we could guide McClain to a brighter life.

Prior to his transport to CT, McClain had been heartworm positive and was treated but also suffered from severe skin issues. In addition, he had infections in both eyes and both ears that required treatment. Upon his arrival, he was evaluated by a local veterinarian and testing was performed on a suspicious lump on his foot. Unfortunately, the news wasn’t positive. The lump was revealed to be a mast cell tumor. Surgeons removed the tumor as well as part of McClain’s foot and miraculously, he is now cancer free. Luckily, a similar lump on his back turned out to be benign. As if that wasn’t enough, McClain began to have grand mal seizures in his CT foster home. With a new diagnosis of epilepsy, he was started on medications to control the seizures.

With support from Dog Star’s medical coordinator, Sue Zeppa, his adoption coordinator, Hayley Haspeslagh and his wonderful foster mom, Nicole Aronson, McClain’s story does have a happy ending. Or in his case, a new beginning!

McClain’s new mom, Kelly,  fell in love with McClain, despite his imperfections. “Every dog comes with hidden issues.  McClain comes with a clear warning label.  No need to wonder what problems might arise” said Kelly. McClain is now thriving in his forever home. He’s described as a big lovebug, loves playing with his dog friends and has settled into the life he has always deserved.